The Distiller of London

Gin Ripples across the Pond

Natasha Bahrami – The Gin Girl: Gin and variants viewed from the USA

Gin distilling: from field to bottle

The Richness of Nature

The State of Gin

Aaron Knoll (Chair): How little is too little juniper for a gin to be considered a gin? A view from America.

Trespassers will be prosecuted

Matthew Pauley, the International Centre for Brewing and Distilling at Heriot Watt University

Stay on top of Intellectual Property

The State of Gin – Panel Discussion: 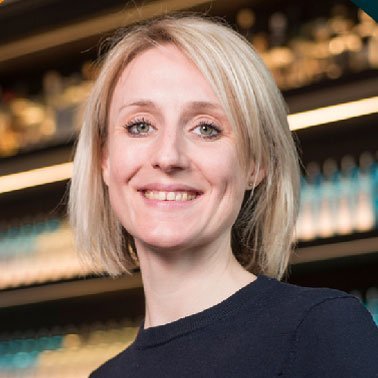 Dr. Anne Brock is Bombay Sapphire’s Master Distiller and a Director of the Gin Guild. Educated at Oxford University, Anne achieved a PhD in Organic Chemistry from St. Catherine’s College and spent four years as lead distiller at a small distillery in central London. In September 2017, she joined the Bombay Sapphire team at the Laverstoke Mill Distillery in Hampshire, bringing with her technical experience and a passion for and in-depth knowledge of the exciting and rapidly expanding gin category. Working alongside the Master of Botanicals, Ivano Tonutti, Anne is responsible for fulfilling the global demand for Bombay Sapphire gin, leading the team of 16 distillers who produce every drop and bottle of Bombay Sapphire at Laverstoke, enjoyed around the world.
Anne is a Rectifier in the Gin Guild and is its current Grand Rectifier.

Dr. Georgia Billing is the General Manager at the City of London Distillery & Bar. She holds a PhD in Nutrition Research. Having grown up in the hospitality business, Georgia has worked in the bar industry since 2004.
Georgia now incorporates her own handmade ingredients, from cordials to vermouths, creating unique cocktail experiences for every customer. Georgia co-founded the Reina Lab., which produces bespoke ingredients for cocktail menus and competitions, using foraged botanicals wherever possible. Georgia’s bitters recipe won her a place in the New Malt Order, an international group of 12 innovative bartenders, who collectively made the first Bartender’s Malt scotch whisky. Georgia was also a top-ten finalist in the Diageo UK World Class bartender competition 2018.

Siobhan Feeley started fresh out of college working in The Oliver Conquest (OC), a little pub in the middle of Aldgate that specialised in gin. Her knowledge and passion for gin and spirits grew from there and through it she was introduced to Ian and Hilary, founders of Sacred Spirits in Highgate, north London. She joined them as an Apprentice Distiller, and is now Distiller and Distillery Manager.

Bernadette Pamplin of Under The Ginfluence writes for Gin Magazine and Distiller Magazine and works behind the scenes for the Craft Distilling Expo. She has judged for Gin of the Year, the World Gin Awards, Spirits Business Awards, Gin Guide Awards, IWSC and the American Distilling Institutes Judging of Craft Spirits, held in San Francisco.

Vanessa Piromallo (ilgin.it) started writing about gin in 2014. She’s the founder and Editor in chief of ilGin.it, the most read Italian website about Gin & Tonic, and a consultant for gin producers. Her mission is to spread the culture of gin in Italy and to make Italian gins known in the world.

Caroline Childerley launched ‘The Gin Queen’ in December 2013 to share her enthusiasm for gin and the people who make it.
Since then, she has launched Junipalooza Melbourne and Sydney with her business partners Spirits Society, and her business The Ginporium, Australia’s First Gin Concierge. She was the first Australian member to be inducted into The Gin Guild and in 2020 was named Icons of Gin ‘Communicator of the Year’.

The Gin Queen is now Australia’s most influential website dedicated to all things gin. Caroline was a Judge for Tasting Australia Spirits Awards 2019, The American Distilling Institute Spirits Competition 2020, Judge for World Gin Awards 2020 and Associate Judge for the 2017 & 2018 Australian Distilled Spirits Awards.

For films of previous events and more
See www.theginguild.com

Find out more about the Gin Guild:

The Guild only recognises gin styles produced by distilling ethyl alcohol in stills traditionally used for gin, in the presence of juniper berries and other botanicals – provided that the juniper taste is predominant.

About the Gin Guild

The Guild operates as a limited company, with the board of directors being appointed by the Worshipful Company Of Distillers, who hold the shares, and include brand owners, master distillers, associated industry representatives and those with wide gin industry experience.

Membership is open to all (subject to gin distillers and brand owners meeting the Gin Guild Gin specification).

Applications for membership of the Guild should be addressed to the Gin Guild Director General (see contact details).

Networking & events
A key benefit of Guild membership is the opportunity to network. The Guild has at least two formal functions a year, at which Guild installations take place. Both offer exceptional hospitality and opportunities for key guests to be invited.

The Spring Installation is combined with the Gin Industry Annual Dinner. Our Autumn Gin Guild Installation event is the more formal of our two installations. It is held at The Mansion House, in the heart of the City of London. Members and their guests are also invited to join our parent company, the Worshipful Company of Distillers, at their Annual Banquet, which follows the Guild Installation.

Guild events offer a quality and worthwhile entertaining programme and support to Guild members, alongside participation in other events (including those of our own creation), to a wider audience.

Prestige and Recognition
Join and be an active member in an organisation supported by many of the world’s leading gin brands, their distillers and colleagues, and celebrate and promote excellence in the distillation and promotion of gin.

Showcase
We provide opportunities, especially for smaller members, to have their products made available to a wider and focused market.

Industry Events
The Guild organises and hosts one of the highlights of the year, the annual Ginposium. This is a one-day trade and industry conference, with many cutting edge seminars on gin topics, from production to marketing. Open to trade, industry, distilling students, and others interested in the subject, these events have been a great success. See film footage of previous events on our website.

Awards
The Guild sponsors key gin awards within the International Wine and Spirit Competition (IWSC). These include the London Dry Gin of the Year and the Distilled Contemporary Gin of the Year.

The Gin Guild Website
The Guild website is an active resource, promoting events, lectures and member companies and brands. There is a members only section.

The significant growth in the number of distilleries producing gins means that there are now a growing and often confusing number of gin styles and tastes to navigate.

The Gin Guild, in consultation with over sixty brands, launched (copyright and Trade Mark), for use by brands.  Gin-Note™ is intended to be a simple flavour indicator of a gin. It is not intended to replace a brands own label but is intended to be a navigational aid. Gin Guild brands listed to date with Gin-Note entries: www.theginguild.com/the-ginopedia

Category Protection
The Guild, working in conjunction with Trading Standards (with whom a Primary Authority partnership exists via Buckinghamshire and Surrey Trading Standards), also has a material role in enforcement and protection of the category. It calls out and seeks correction by beverage brands who claim their products are ‘gin’, but which do not comply with the EU/UK regulations which cover spirit production and sale.


The Guild, in connection with the above, by way of assistance and clarification has already published two key guidance notes interpreting the above regulations. These provide information on how to label no and low alcohol products which emulate (but which are not gin), and gin liqueurs. This guidance is known as Approved Guidance and is formally issued by our Primary Authority partnership, and approved by DEFRA.

Any cookies that may not be particularly necessary for the website to function and is used specifically to collect user personal data via analytics, ads, other embedded contents are termed as non-necessary cookies. It is mandatory to procure user consent prior to running these cookies on your website.

Preference cookies are used to store user preferences to provide them with content that is customised accordingly. This includes the language of the website or the location of the visitor.

Advertising cookies help us provide our visitors with relevant ads and marketing campaigns.

Analytics cookies help us understand how our visitors interact with the website. It helps us understand the number of visitors, where the visitors are coming from, and the pages they navigate. The cookies collect this data and are reported anonymously.